San Diego, with light at the end of the tunnel finally here, chances are you might be ready to host “Movie Night” again. But why cram everyone into your family room when you can add an outdoor movie theater to your backyard? After all, there’s nothing quite like watching a movie on a big screen. And while drive-ins have made a comeback, you’ll have a much better experience in the comfort of your own backyard. So, if you are feeling nostalgic for retro drive-ins, you’ll love taking your movie nights outside especially as the weather gets warmer. But, building an outdoor movie theater is easier than it sounds. For this reason, we wanted to offer some insight on what you’ll need for an outdoor theater to work.

An outdoor home movie theater is the perfect way to enjoy your backyard all year long (especially in San Diego). Whether you’re planning to binge an entire season of a newly released show on Netflix or Hulu, there’s something magical about watching a movie under the stars. And, it’s even better if you never have to leave home to do it! But before you start setting up your outdoor movie theater, there are some decisions you have to make.

While you won’t need half an acre to host movie night, planning around the real estate you do have is important. 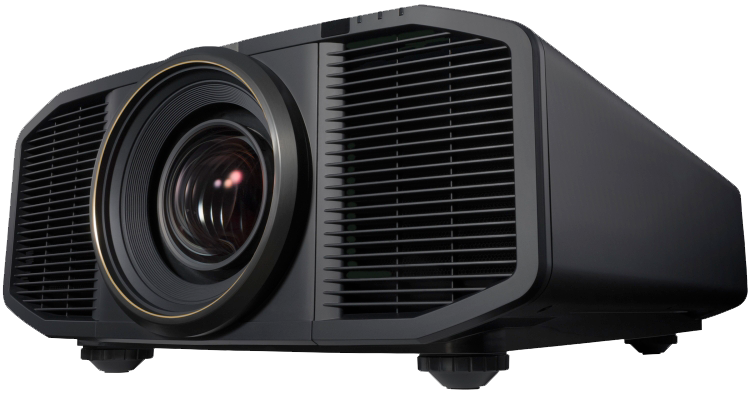 If you want epic entertainment, adding the right projector is key. While there are endless options out there, most of the time no matter what you are buying, you get what you pay for. Here are some things you need to know about home theater projectors:

Projector brightness is measured in lumens; the higher the lumens, the brighter the projector will be at a given distance. This means the brighter your projector, the earlier you can start your movie night. To put things into perspective, an average projector lumens range from 500 to 2500 while JVC reference series projectors offer up to 3,000 lumens. One thing to make note of, if you’ll be using the projector in an urban area with a lot of light pollution, you’ll want a projector that offers at least 3,000.

Choosing contrast ratio is heavily dependent on the lighting conditions of your outdoor environment (light sources out of your control such as street lights). Contrast ratio is the intrinsic ability of the projector to show the complete range of image contrast simultaneously. So, a projector with a high contrast ratio will allow you to see clearly defined shadow detail and deeper black levels (adding a sense of depth and dimension to the picture). 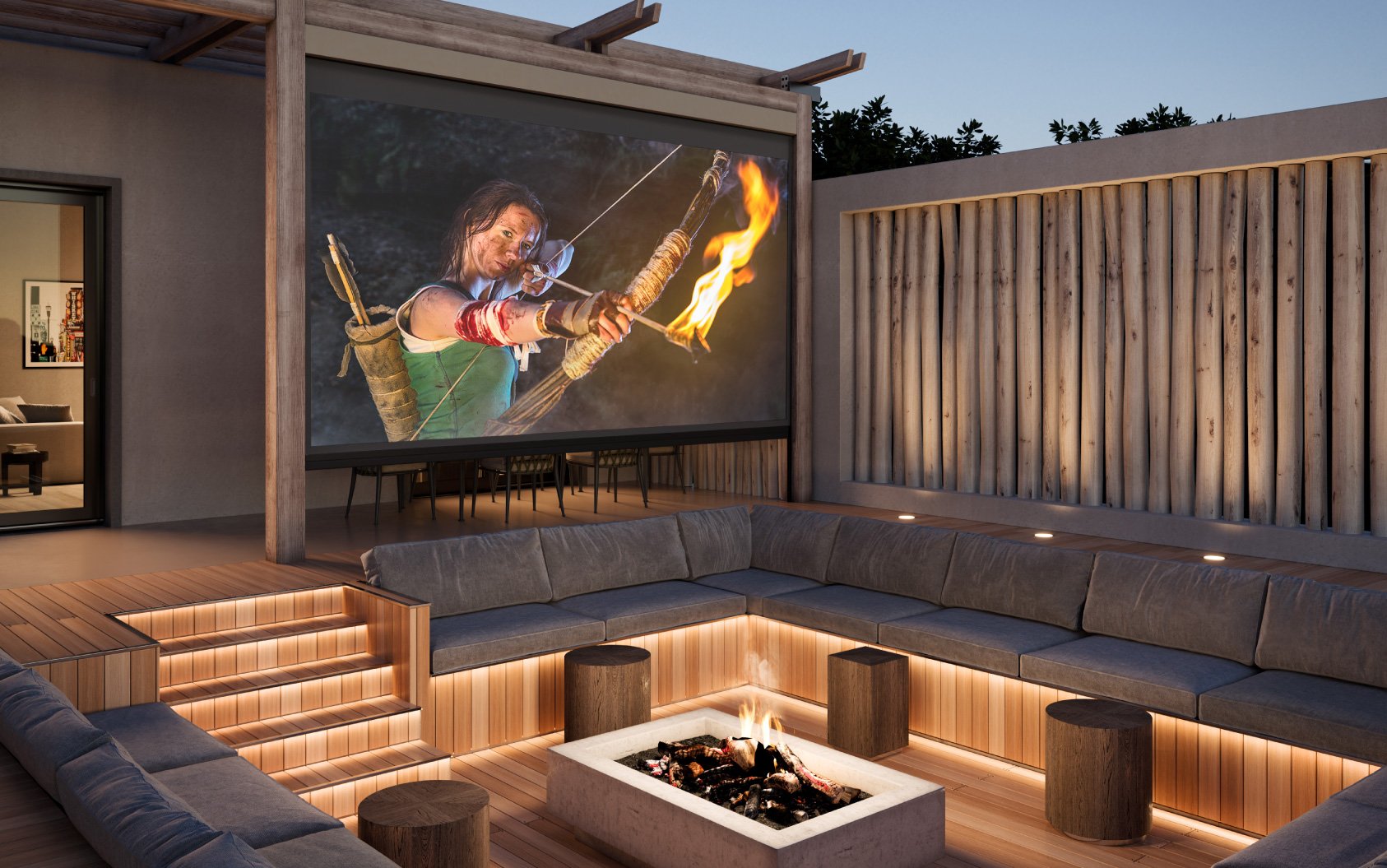 The screen is just as important as the projector. A high quality outdoor movie screen with enhance your projectors image and quality. But, make sure your projector will work with your screen size. Also, keep in mind that every screen is rated by how efficiently it reflects light (gain factor). And, the higher the gain, the brighter the image will be on the screen.

Turn any outdoor space into a home theater. Solo 3 outdoor is the first architecturally design-focused outdoor screen solution that seamlessly blends into a home’s design. Transform your outdoor area into a comfortable, stylish living space.

The last step is to consider sound. It should be noted, we suggest adding an Episode Landscape Series Speaker Kit for a few very good reasons. One, it allows you to listen to your music throughout your backyard. And, two it doubles as your theater sound. For this reason, we offer some insight on this outdoor sound system.

A complete sound system that brings music to life, the Episode Landscape Series is the perfect addition to any outdoor space. Attractive speakers blend seamlessly into the environment, providing maximum performance and minimum visual interference, while a Crown® amplifier and burial subwoofer add some serious power. Whether you’re playing soft, background tunes or hosting a movie night, this professional grade system will have you smiling the whole time you’re listening. 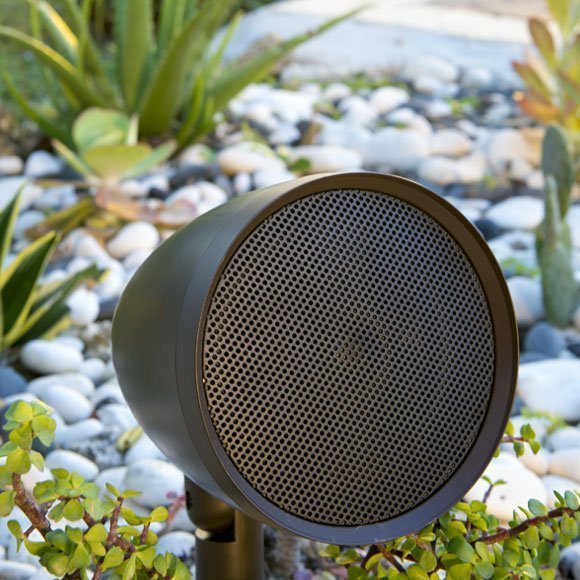 Landscape speakers are meant to be heard – not seen. These aesthetically pleasing speakers blend right into your outdoor space. Whether mounted on the ground, in a tree, or under a trellis, they deliver top-notch audio without drawing attention to themselves. 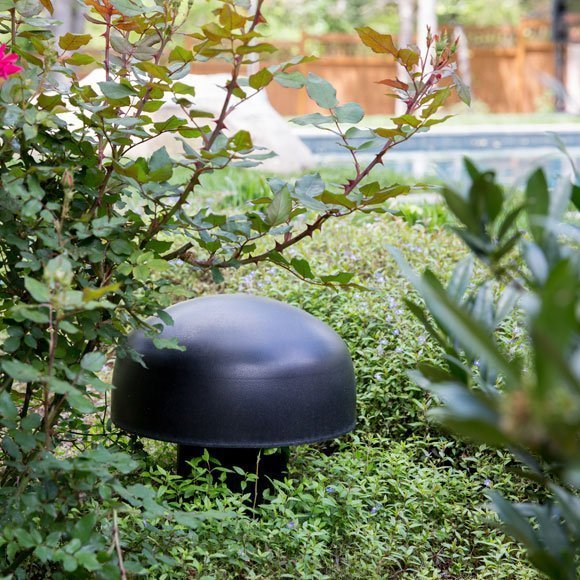 Bring the Boom to the Backyard

The perfect complement to Episode Landscape Series Speakers, a burial subwoofer packs a punch and adds some serious power to your system. Available in three woofer sizes, it delivers deep, pounding bass and hits all the low notes. 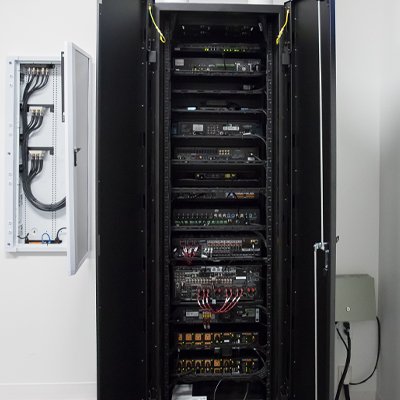 Get premium performance for even the largest outdoor speaker systems with a Crown® amplifier. Its compact form factor makes it easy to store, but don’t let its size fool you − it has enough power to keep your speakers rocking.

With years of experience, our team of outdoor theater system installation experts can help you design your outdoor oasis. When you are ready to add an outdoor movie theater and want the best solutions, products and installation services, call Shultz Audio Video. San Diego’s trusted source for home theater installation and home automation integration. Ready to take your home entertainment to the next level? Let us show you how it all works with a complimentary outdoor audio demo. Contact us today at (760) 505-7461 or press on the button below to fill out the popup contact form to get started!

Important information on the safety measures we take, COVID-19 operations. 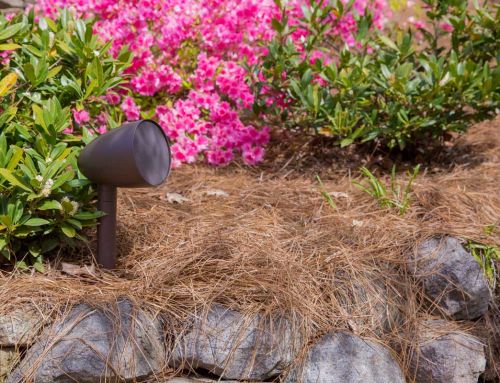 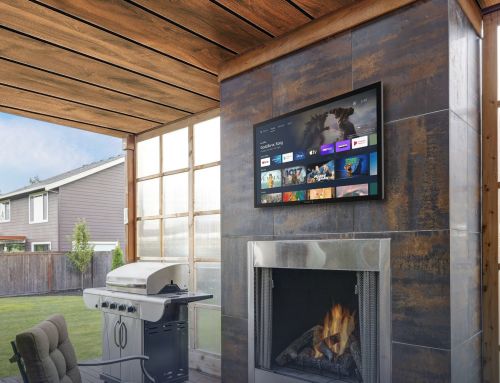 What to Look for in an Outdoor TV Gallery

What to Look for in an Outdoor TV 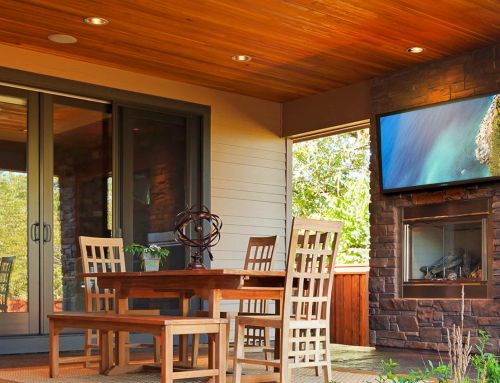 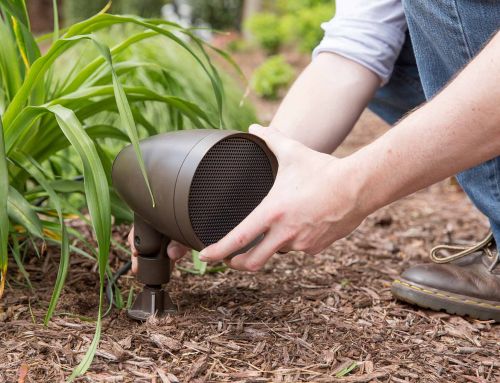 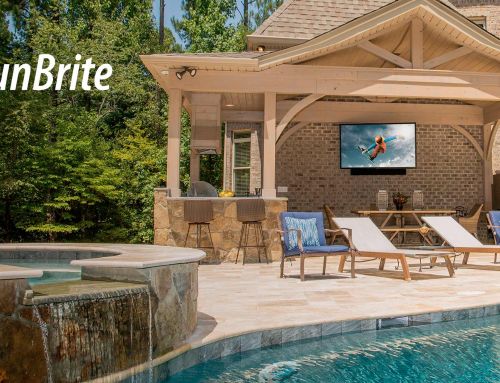